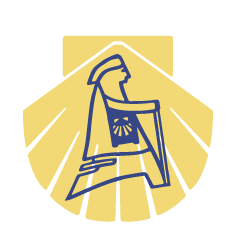 From Utrecht to Santiago de Compostela

Most books on the Camino start off with someone having a personal crisis and then deciding to rediscover themselves on the road. Not in our case. We just sort of stumbled into it! One sunny day in november 2008 we went for a walk. Over lunch we apparently decided not to head back but to […]

Pilgrims walk upon foreign lands. They are not owners of those lands nor of any person there. Pilgrims seach for more… They walk the Way without faltering, towards a goal. The goals of this world are not the final goals, and if you walk towards them you will find other similar goals. The Way of […]

Cathedral of the Caminos, the A4

A cathedral is, as well as a church where the Bishop has his cathedra, an ecclesiastical institution and a place for the faithful. And, in Compostela’s case, it is also de destination of hundreds of thousands of pilgrims from every corner of the globe that project into it their yearnings, hopes and expieriences. It is […]

On a clear morning, a swallow flew among the spires of the Cathedral of Santiago, before settling on one elaborate cornice to rest and admire the view over the entire city and the countryside beyond. Something strange is happening as there is a crowd entering and leaving the city. What is going on? Follow the […]

Between Saint James and Erasmus

This volume is divided into four sections: late medieval devotions in the Netherlands; medieval Christians pilgrimages, the medieval cult of St. James the Great; and Erasmiana.

Pilgrimage is a feature of all the world religions. From the Great Panathenaea of ancient Greece to the hajj of today, people of all religions and cultures have made sacred journeys to confirm their faith and their part in a larger identity. This book is a fascinating guide through the vast and varied cultural territory […]

On and off the Portuguese way